Taylor Ellis '21 is a 2020-21 Environmental Ethics Fellow at the Markkula Center for Applied Ethics. Views are his own. 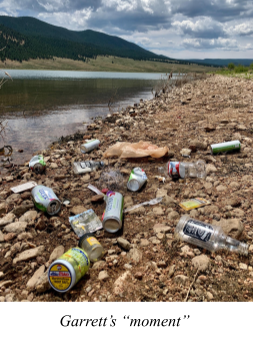 At dusk, Garrett VeneKlasen and Terry Ellis find an assortment of trash. Cans, bottles, plastic bags, and fishing bait lie lifeless on the bank of Eagle Nest Lake in Northern New Mexico. The backdrop of rolling hills spotted with sagebrush have extended for the entire existence of humans on this land. Generations of First Nation peoples and settlers from other lands have acquired knowledge from the pine forests of Northern New Mexico, and each subsequent generation has updated that original knowledge in ways that suit their lives. Our knowledge, and very being, is a product of the environment that we are now neglecting. The turbulence of the past six months has caused many people to migrate into the stability of the outdoors, and reconnect with our sense of self. The single-use cans lie in the dirt after a moment of, what Garrett calls, “willful ignorance.” The lives of these cans were ended on the side of Eagle Nest Lake.

Garrett took this photo and continues to reflect on it. “We have a serious problem,” he said.

This was the moment for Garrett.

Much of Garrett’s life revolves around a concern for the environment. Garrett is a passionate fisherman, a thoughtful hunter, and the Northern Conservation Director for New Mexico Wilderness Alliance. Garrett’s sturdy stature and thick beard are acclimated well to the dramatic seasons in this area, and his activities symbolize a conscious attempt to reconnect to the land that helped raise him. I have been lucky enough to have Garrett and my father, Terry, as guides for my entire life. I have relied upon their knowledge of fly fishing, and have been inspired by their unwavering enthusiasm. An avid outdoorsman and environmental advocate, Garrett has made it his life’s work to seek an understanding of the foundation of our being: the environment. In the pursuit of his life’s work, Garrett has embraced very different cultures as well.

The Pirahā culture of the Amazon has a commanding understanding of the environment and their relationship with it. They are one of several groups of people who are deemed “anumeric,” meaning numbers are nonexistent in their normal language. Age, time, weight, and wealth are irrelevant. Their elimination of time introduces uncertainty and fear for many, but for the Pirahā, all life is now. The Pirahā are geographically dominated by the thick Amazon rainforest. This is their home and they are the translators of its language. Their now is dependent on the Amazon rainforest.

During his time living with the Pirahā, Garrett was humbled by their way of life. Garrett felt like a “toy poodle” domesticated by American life and disconnected from now. The Pirahā had what seemed like perfect senses of smell, hearing, and sight, and Garrett trailed behind them on a leash, being dragged through the precarious Amazon rainforest, manipulated by the jungle's uncertain effects on his future. One day, a Pirahā man came up to Garrett and grabbed his elbow. The Pirahā man stared right into his eyes and barked in a frustrated tone. The translator turned to Garrett and said, “he wants me to tell you that you are not here with him. You are not here.” Losing our sense of the present seems to be a symptom of our modern world. 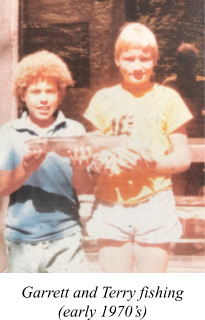 At dawn that day, Garrett and Terry attentively amble around Eagle Nest Lake, fishing for “truchas,” or trout. They observe the characteristics of the lake, with eyes trained by decades of fly fishing. They notice its depth, the organisms that live here, its water temperature, all in an attempt to understand the fish. They step into the water and initiate their pursuit. The whistle of their fly rods echo an unspoken language signifying the humans inextricable connection to our aquatic friends. The fish find comfort in the mutual understanding that these men are here to rediscover their being. We cannot survive in their home, and they cannot survive in our home, but the ballad of fly fishing is an attempt to reconcile this difference through the moment of embracing the fish and then letting it return home. The two men are centered by the tranquility of this single moment, consciously ignoring the leverage of the past and the future. For these two, fly fishing lies at the intersection of being and now.

For Garrett, leaving Eagle Nest Lake that day was bittersweet. Fly fishing helps Garrett reinforce his connection to the natural world and the present moment, but the lifeless cans were unsettling. Garrett picked up the trash because he believes that it did not belong at Eagle’s Nest Lake. The outbreak of COVID-19 has forced many people in a state of uncertainty, and our access to the environment through public lands has helped preserve our sense of being during this time. The existence of the cans is evidence that the natural world has been a source of liberation during self-isolation. However, the expiration of the cans in an unnatural space reveals a neglect for the environment. Without the natural world paving our past and future, our sense of now would be obliterated. This is our moment.