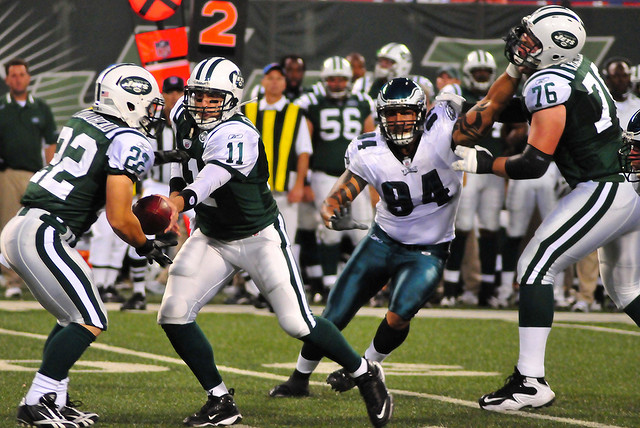 Photo by Ed Yourdon available under a Creative Commons license of www.flickr.com.

Professional sports are central to American culture. Not only is the Superbowl the most watched event each year on television, but tens of millions of Americans attend professional sports games in person each year and even more follow their favorite team's and player's behavior in the media.

Ethical issues in professional sports are widely debated in the press. They include the following.

What is the role of professional sports in American culture?

Most regard professional sports as a form of entertainment. We root for our favorite team because we love the excitement we feel when they win, and we feel the pain and disappointment when they lose. In the era of ESPN and Budweiser, professional athletes are often treated like rock stars and worshipped by countless fans. But, for those who think ethics plays a role in sports, professional athletes are held to a higher standard. They are seen as role models responsible for setting an example for others to follow, especially young people.

Most would agree that sports have the power to bring a community together. Rooting for our favorite teams has a way of uniting people with different backgrounds and experiences under one common symbol. People often say that a sports team reflects the character of its hometown and the people who live in it. Some, though, take it a step further and argue that a city's professional sports teams actually play a significant role in shaping the values and character of society in general. For instance, if a player were to break the law during the off-season, but then come back and lead his or her team to a championship, most people would quickly dismiss the transgression and celebrate the player as a hero. What does it say about a society when the success of its athletes causes it to suspend or lower the standards of behavior? Is it right to give our most prominent athletes a free pass when it comes to their actions? Is it fair to the average citizen? Do professional athletes have an ethical responsibility to set an example for the people living in their communities? Or are they simply entertainers, providing a service?

How do you define cheating in professional sports?

There is so much money at stake in professional sports, both for the players and for the owners, that the temptation to "game" the system or cheat is particularly strong.

Some would argue that the role of a coach and athlete is to seize as much of an advantage as possible, following the rules but trying to get around them whenever possible.

Some even believe "game ethics" makes it okay to cheat if you don't get caught. Others would argue that players, coaches, and owners should follow the "spirit" of the rules.

When cheating is discovered – whether it is a corked bat, a drug-enhanced performance, or a legal but shabby practice—what should be the penalty? Is cheating a big thing or a small thing? Should cheating, for example, lead to expulsion from the sport?

Who is responsible for the health and safety of professional athletes? Who decides when to go back in a game?

The recent "Bounty" scandal involving the New Orleans Saints, as well as all of the research coming out about the dangers of head injuries and concussions in professional football has made player safety one of the major concerns of professional sports. However, not everyone is so concerned.

There is a debate within sports like football and hockey about the feasibility of making the sport safer. The evidence is fairly clear that concussions should be taken seriously by players and coaches, but some argue that the culture of the sports is just too inherently violent to change.

Money influences decisions regarding safety as well. The average NFL career is only 3-5 years, and with most contracts structured in a way that is heavy on incentives rather than guaranteed money, players are under tremendous pressure to remain on the field in order to make as much money as possible. And who decides if the player plays hurt or goes back in? Often coaches are put in a position where a doctor decides that a player has suffered a concussion and should not go in, but a player tries to cover it up and wants to play through it. Does a coach respect the autonomy of the player? Or is taking him or her out of the game in order to ensure health and safety the right thing to do?

What is a professional athlete's responsibility to his or her community?

Most would agree that players have a duty to give back to the fans that support them through some sort of community service. Many athletes have foundations in their names, and offer their notoriety in order to gain support for a particular cause. Is it an ethical obligation? And how much should an athlete do?

What about an athlete's off-field behavior? Every off-season, stories appear on ESPN about athletes getting in trouble with the law. We don't often see it derail or affect their status on the team. Of course they may go to jail, but then they still can come back, and, if they are good enough athletes, still play professional sports. Some argue that athletes are human, and that if a player shows true remorse for his or her actions, then he or she deserves our forgiveness. A prime example is Michael Vick. Is this ethical? Others argue that due to the prominent role of athletes as role models in the community, the standard for their behavior ought to be higher.