Expanding the picture of success

It can be a challenge to envision your own career success when you don’t see leaders in your field who look like you. The Diversity, Equity, and Inclusion Distinguished Lecture Series shines a light on what’s possible and inspires the next generation of Santa Clara STEM professionals with quarterly presentations by successful underrepresented engineering leaders. Guest lecturers from industry, academia, and research share their experience of overcoming obstacles and lessons learned throughout their careers and offer their thoughts on how to increase diversity, equity, and inclusion in STEM. Free and open to all, we invite you to join us! 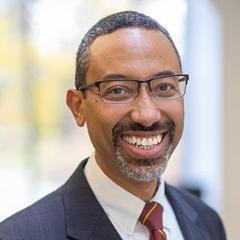 Dr. Andrew Alleyne received the B.S. in Mechanical and Aerospace from Princeton University in 1989, and the M.S. and Ph.D. degrees in Mechanical Engineering from the University of California at Berkeley in 1992 and 1994, respectively. He is currently the Dean of the College of Science and Engineering at the University of Minnesota, Twin Cities where he also holds the Russell and Elizabeth Bennett Chair. Prior to joining Minnesota, he was a faculty member for nearly 30 years in the Mechanical and Electrical Engineering departments at the University of Illinois at Urbana Champaign where he held the Ralph & Catherine Fisher Professor of Engineering. He is a Fellow of IEEE, ASME and AAAS and was a Fulbright Fellow to the Netherlands where he held a Visiting Professorship at TU Delft. His research background encompasses the modeling, simulation, and implementation of control systems for complex systems and nonlinear systems. His academic record includes supervision of over 80 M.S. and Ph.D. students and over 400 conference and journal publications. His basic research efforts have been applied and commercialized with patents and two separate software tools licensed to industry and transitioned to the Department of Defense. He has been active in external advisory boards for universities, industry and government including the U.S. Air Force, Army, and the Department of Energy. He has been a strong advocate for diversifying academia and has received the Society of Women Engineers Advocating Women in Engineering Award as well as the University of Illinois Larine Cowan Award for Teaching and Mentoring in Diversity. In addition to research and service, he has a keen interest in education  and  earned  the UIUC College  of  Engineering  Teaching  Excellence  Award, the UIUC Campus Award for Excellence in Undergraduate Education and the UIUC Campus Award for Excellence in Graduate Student Mentoring.

As chancellor of one of the world’s great public research universities, Gary S. May leads UC Davis as it advances its mission
in several key areas, including: 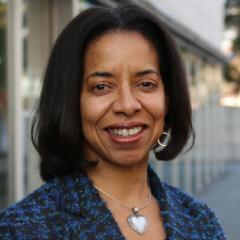 October 14, 2021
Joanne C. Wilson
Joanne Wilson is an electrical engineer with more than 30 years of professional experience in the telecommunications, including more than 25 years of involvement in the work of the Radiocommunication Sector of the International Telecommunication Union (ITU-R). Ms. Wilson holds a Bachelor of Science in Electrical Engineering degree from Southern University (1981) and a Master of Science degree in electrical engineering from Stanford University (1982), with further graduate study at Princeton University (1986).
Wilson is currently the Deputy to the Director of the Radiocommunication Bureau (BR) and Chief of its Informatics, Administration and Publications (IAP) Department. As Deputy Director, she assists and advises the BR Director in the direction and management of the Bureau and leads the BR’s preparation for its major conferences.  Ms. Wilson was the Secretary to the Plenary and to the Steering Committee of the 2019 World Radiocommunication Conference (WRC-19) recently held in Sharm el-Sheikh, Egypt.
Watch the Recorded Event
Watch the Special Seminar

Aaron Dominguez is the Provost and an Ordinary Professor of Physics at The Catholic University of America. His main area of research is in using particle colliders to search for new physics, including the recently discovered Higgs boson. His area of expertise is in instrumentation—designing, building and using silicon charged particle trackers as precision tools to reconstruct the complicated interactions taking place in these collisions.

He received his undergraduate degrees from Whitman College and Caltech, his Ph.D. in physics from UC San Diego and was a postdoctoral researcher at Lawrence Berkeley National Laboratory. In 2005, he was the recipient of the NSF CAREER award. He has played numerous leadership positions in the L3, CDF and CMS particle physics experiments at the CERN laboratory in Switzerland and Fermilab in Chicago. Specifically, he just recently finished being the deputy project leader for the upgrades of CMS as the principal investigator of an NSF project that is funding the US efforts of nine universities to improve the silicon pixel detector, hadron calorimeter and trigger in preparation for high luminosity runs of the LHC in coming years. He has mentored seven postdoctoral researchers, three graduate students to completion, three currently in progress, and numerous undergraduates. He is a member of the National Science Board, serves on several advisory boards, including QuarkNet, and is an author on more than 1100 papers in experimental high energy physics and instrumentation.

As the Provost, Dr. Dominguez is the Chief Academic Officer of the university and oversees the academic life of Catholic University’s 12 schools, its libraries, research institutes, and the Catholic University of America Press. He aims to change the course of students’ lives and propel them toward a meaningful future.