The enthusiasm of so many dedicated individuals resulted in a substantial contribution to the Cultural Resources Management Program at SCU and deepened the appreciation of the priceless heritage site at Mission Santa Cruz. 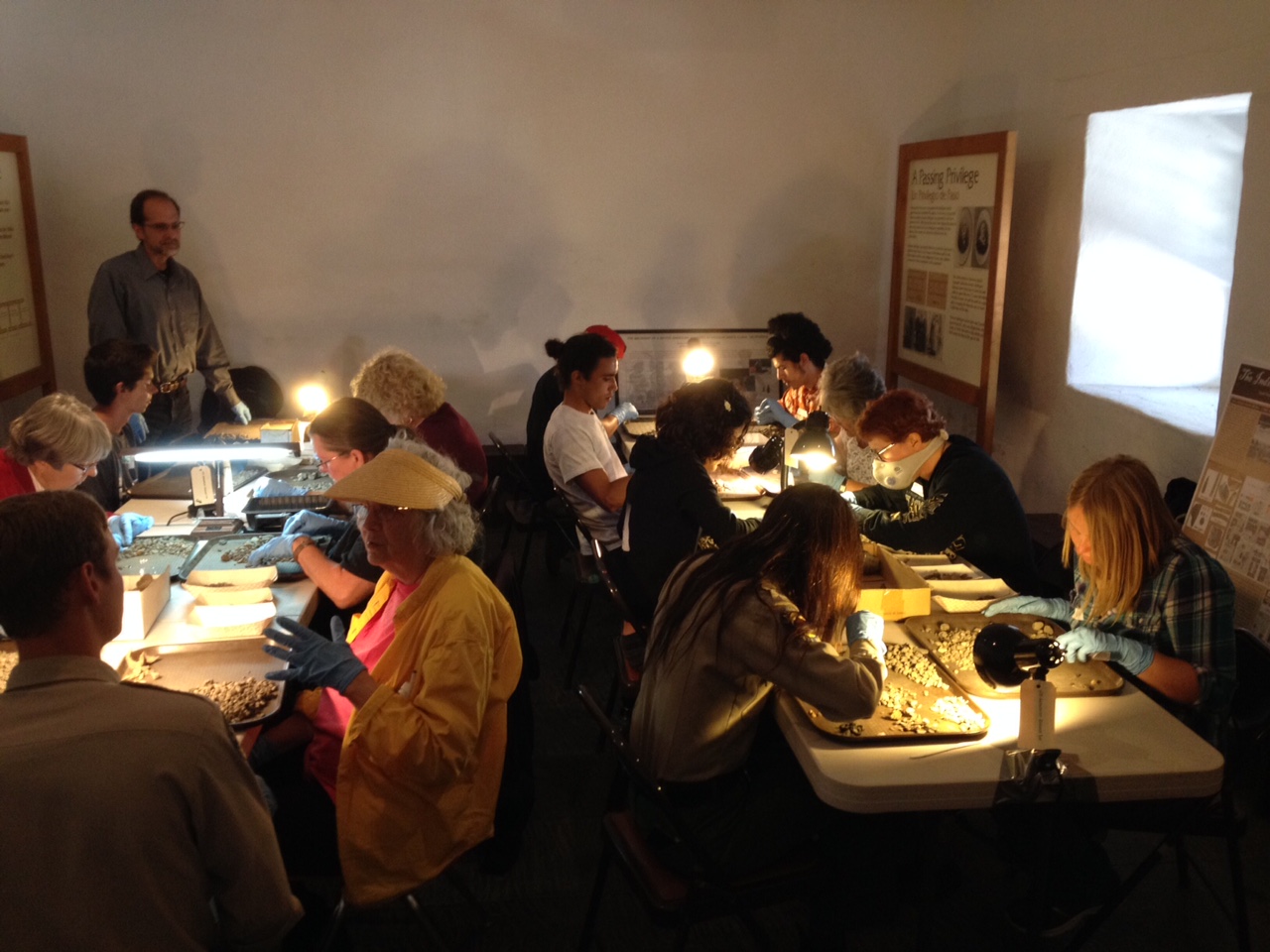 In order to help SCU process the massive artifact collection, and to help with its public outreach program, California State Department of Parks and Recreation (hereafter referred to as State Parks) and Santa Clara University’s Cultural Resources Management program have partnered to create the Summer Archaeology Program for volunteers to gain hands-on experience in handling and identifying a variety of artifact types. Why involve State Parks? Because Mission Santa Cruz State Historic Park is the only remaining neophyte housing preserved as a museum in California. Their public outreach program is a curricular staple for elementary schools throughout the San Francisco Bay Area.

Throughout July and August, thirty participants from a variety of institutions, which included students from Cabrillo and de Anza Colleges, Cal Poly Luis Obispo, CSU Fullerton, CSU Monterey Bay, UC Santa Cruz and SCU, as well as two high school students, two State Parks docents (in addition to the Parks staff at Santa Cruz mission), and eight members of the general public rolled up their sleeves, donned gloves and dust masks to screen and sort through a variety of artifacts. On the first day, the participants were given a PowerPoint overview of the project and the types of artifacts to look for. Each week thereafter, SCU offered a short enrichment presentation on different aspects of missionization and native culture that directly related to the materials they were sorting. On the last day of the program, Mutsun Ohlone tribal representative Ann Marie Sayers joined the group to look over the summer’s findings and to bless the project.

The participants sorted through several dozen gallon-sized bags of artifact-laden gravels that were recovered from the Franklin parking garage location (these were too numerous to process in the field, so they were boxed for later sorting). By far, the most abundant artifact type recovered was faunal bone. In addition to being used as food, there is also evidence in the form of hack marks and spiral fractures that the bones of larger animals (cattle) were processed for grease and marrow. Additional food resources recovered include sheep, deer, multiple bird species (primarily duck), rodents, rabbit, very small reptile, and very tiny fish vertebra. The participants also found ocean mussel, olive snail, abalone, and clam (all ocean species). Charred cultigens of barley, wheat, rice, peas, stone fruit, as well as local flora were also identified.

Other exciting finds included one bone tool fragment, one polished bone awl of a type that was traditionally used for basket making, shell and glass beads, mission-made ceramics and imported (from England and Mexico) ceramics. These items will ultimately be exhibited on the SCU campus as part of a larger exhibit within the de Saisset Museum in 2017. This was the first summer of what will be a multi-year project (plans for 2016 are already underway!) and the Cultural Resources Management program is excited to involve the community in the process of revealing history and preserving our heritage. Just as importantly, the amount of work that was accomplished in eight weeks would have taken several months to complete within SCU’s archaeological facility. It was truly a collaborative effort!

Photo Info:
#1. Volunteers are hard at work sorting artifacts inside the 1820’s adobe at Mission Santa Cruz State Historic Park.
#2. A selection of shell and glass beads recovered during the artifact sorting.